The Death & Life of the Hippodrome 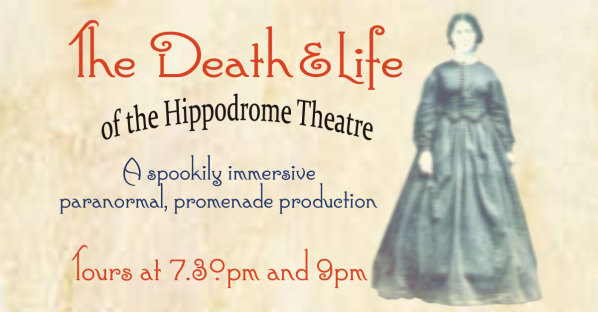 This is the collection of poems that made up the Death & Life of the Hippodrome theatrical tour, which ran during 2019. The poems are 11 syllables per line (except for one) and were all inspired by stories of the actors who have played there and the ghost stories associated with the building, including that of a woman in black, whose photo was captured by my good friend and paranormal business partner Jeff Bentley-Astor. 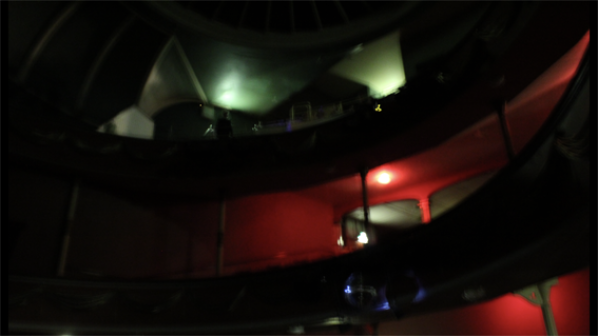 Look at the left-of-the-centre of the upper circle - there is a very clear figure in black standing there (ignore the white shapes - those are just refraction from the lights). This was taken after a dark shadows were spotted flitting accross the circle

I know the photo is real, because I was there, with three other people on the stage when it was taken. There was nobody else in the building at the time - a fact which we have verified.

Welcome to the Hippodrome 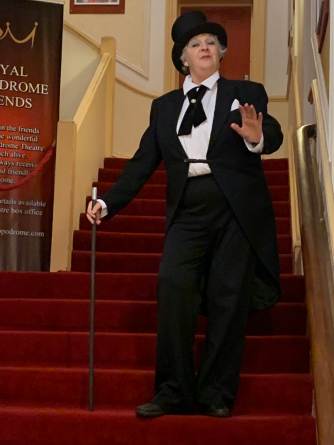 Most welcome, dear guests to our old Hippodrome

Where ghosts of the stage are reputed to roam

Where drama and tears and the heady love trysts

Are performed for the show, then cease to exist.

Except for those actors, who make it their home

Forever entombed in this old Hippodrome

You might spot them tonight - as we tour this place

And you may even meet a ghost, face-to-face,

But there’s nothing to fear, if spooks are unreal

Decide for yourself as our tales are revealed…

When the Hippo was built; eighteen-eighty-three

This foyer was only for folks without fleas

The smellier classes were sent round the side

So well-heeled and penniless wouldn’t collide.

Common and toff, can partake side-by-side

But that doesn’t give leave for a noisy crowd

In fact, till the stage, there’s no talking allowed

So follow me in, we’ll get this tour started

Be warned, it is dark and not for faint-hearted. 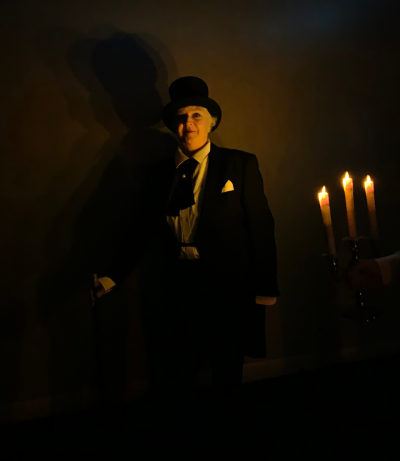 From Victorian times, a gothic passion;

Chatting with ghosts, after tea, was in fashion

A table was set and the candles were lit

Then guests of high status were bidden to sit

With clairvoyants who, through the holding of hands

Would rouse up dead sons from the fields of the war

With strontium paint so the punters would know

That the ghosts were afoot and spirits abound

With rapping on tables and other strange sounds

Then, brought to the masses, presented on stage

The public séance of the spiritist age

Debunked by Houdini who named them all shills

And talking of Harry, beneath this stage floor

Are pulleys he used for his getaway door. 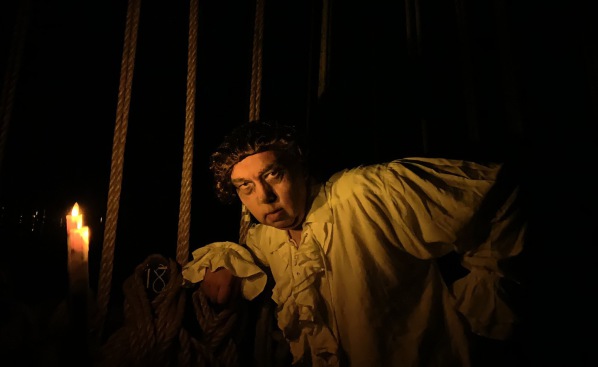 Now, a different and malevolent ghost…

Todd Slaughter was known as an actor of most

Owning Sweeney Todd first on stage, then on screen

With a grave-yard chuckle that stole every scene

But a legend can’t last and if tales are true

Now, he’s craving the screams of his faithful fans

Hoping to scare you with his icy-cold hands

Eagerly haunting in the wings of the stage

The best pantomime baddie of yesterdays.

Alone in the darkness, one terrible day

A stage hand was lost in a most horrid way

But the cause of his death could cause little mirth

You see, he was shifting some scenery down

His hand got caught up and he hung off the ground

Then slowly and painfully, screaming for aid

His hand got detached and he couldn’t be saved

The Figure in the Gods 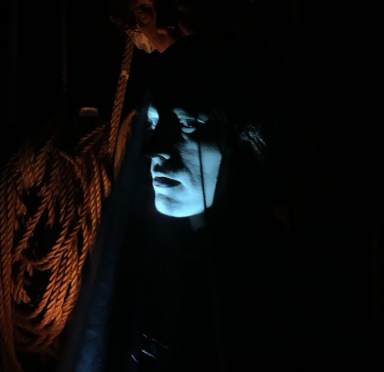 Of a former time

Lurks in the gods

Of her vaudeville age 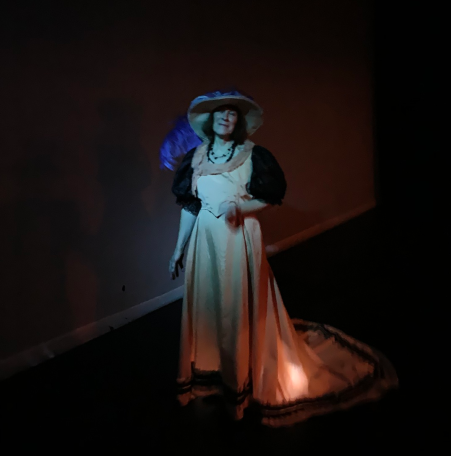 A lady in gowns of Victorian style

Who lingers and watches, then wanders a while

Her presence - a question, existence - a doubt

But ghost hunter groups have been hanging about

Hoping to spot her, their sport vindicated

Though mostly, they find their vigil is wasted

However, for one, their time was rewarded

A film of the lady, perhaps, was recorded

A mobile-phone film of the dark, gloomy stalls

They panned it across from the stage to the walls

And there at the bottom, just seconds are seen

Of a ghostly woman in black on the screen

Right there, in the seats just below where we stand

A possible ghost - or a hoax that was planned?

……But move it along, there is nothing to see 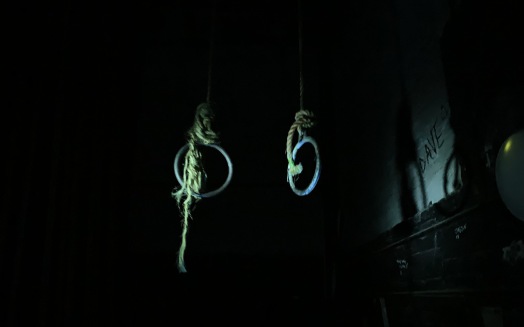 It was commonly known that sailors in need

Of earning some money, were sure to succeed

To gain a small income from pulling the ropes

At local playhouses, not far from their boats

These sailors-come fly men with knowledge of knots

Were charged with the up and down scenery drops

The hemp ropes were hefty, with no counterweights

Entanglement risks were a constant headache

Many a keen sailor was killed on the job

And one of those deaths was a flyman named Bob

Who in between working would like to stay fit

Installing these hoops as gymnasium kit

But sadly one evening the ropes caught him tight

With no axe to save him by cutting the ropes

The poor man was hanging without any hope

He now haunts the flyfloor before every play

You’ll know that he’s here when his hoops start to sway!

A whistling code to commune from on high

A clever system, with one fatal pitfall

The errant whistles from folk in the stalls

So, rumour was spread that a whistle would trigger

A string of bad luck to each hapless sinner 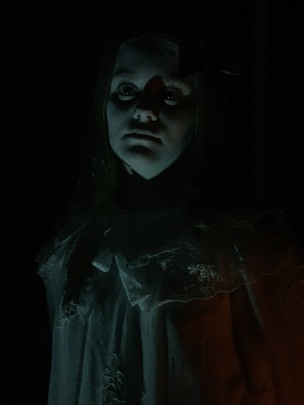 While father was busy controlling the stage

Admiring the actresses powder and groom

Her beloved place was in this dressing room

But poor Emily’s heart was weakened and frail

A bronchial wheezing that wracked her young frame

And just twelve years old - such a terrible shame

Well, somehow her spirit has clung to these walls

Roaming forlornly down the dressing-room halls

And if some poor actress is suffering nerves

To alleviate stress with her calming glow

But who could have done it? While I was engrossed?

In reading this new script of most heinous crime

Somebody slipped in and stabbed me in my prime

A rogue in the theatre, who could it be?

They must have a serious grievance ‘gainst me

Perhaps it was Mabel, the Manager’s wife?

I told her old man she was out of his life

She’s gone with the boss of the Devonshire’s stage

In hopes he would offer her more than a wage

And then there’s Marie Lloyd – I’m ending her show

A woman’s no use when her loveliness goes

Or possibly Slaughter, whose wage I have cut

Or maybe the staff who got wind we could shut…

And though his murder was not unexpected

His spirit can join this cadaverous crew

In silent surveillance of all that is new

With those of us who played our parts in this place

Those opera days that could not be revived

As rivalrous venues popped up all around

And shows had to halt for that hellish sound

Of bombs all around her, the worst on the coast

In Hellfire Corner the damage struck most

But the bombs barely damaged the architraves

Our oldest theatre (by a year) was saved

Then time took its toll and our status declined

This end of the town was sorely neglected

Our future was dead, our past unprotected

Our Hippo’s reclaiming her glorious days.