WELCOME TO MY (very) SHORT STORIES 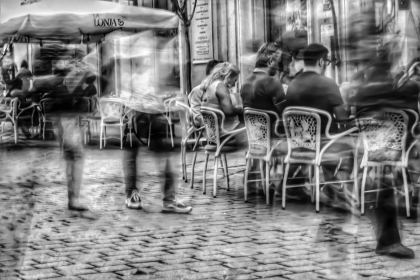 (Photo by Ariel_ Agüerophoto on Unsplash)

Three women, breezy dresses; one honey-skinned, perhaps from somewhere hot and spiced, the other two could have been sisters, mousey, not thin or fat or particularly tall or short.  Three women, about forty, I cannot recall what they wore on their feet.

I remember walking past them, squeezing along the narrow strip of pavement between their café-side chairs and the busy street.  I smiled as I turned inward to shimmy past.  The one with lovely skin glanced up and our eyes registered one another, for a second.  They were green, I’m sure of that.

One of the mousey pair turned to see who had brushed against the back of her chair, smiled apologetically when she realised it was her fault for not leaving enough room and scraped her chair noisily inwards.

I had no contact with the third woman, she failed to look up from device she was squinting to read.  I wish she had.  Her generous mouth looked like it was capable of a smile that could light even my world.  I stared for a moment longer than was polite, because she was occupied, I got away with it.

Three women, elevated to goddesses in the diminishing glow of a rush-hour sun.  Etched on my mind as the last, most beautiful sight I was to see.

For I too, scratched a permanent mark on their memories as the clumsy man who stumbled beneath a passing truck and bloodied their pleasant soiree. 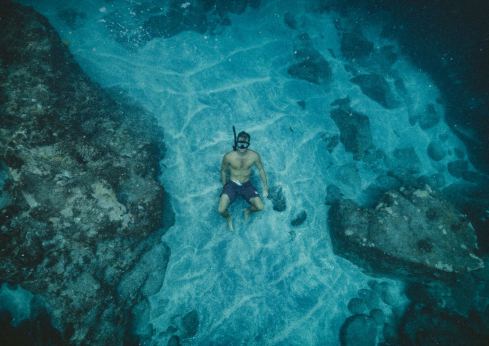 (Photo by Jakob Owens on Unsplash)

The Last Man on Earth

Wearily, Solomon opened the outer-pod door, counted to ten - closed it again. It took twenty-six seconds for the water to drain out before he opened the inner-pod door to greet his beloved mother.

She was quivering with excitement, “I got fresh fruit,” she said thrusting three bruised apples and a brown banana at him.

Solomon peeled his mother out of her dry-suit and gently towelled her sparse, wispy-grey hair. He brought some warm broth from their small stove and sat on the floor staring up at her while she slowly ate.

“You can’t keep doing this for me,” he said, “one of these days you’ll be too weak to swim against the current.”

“But until then…” his mother smiled at him.

Solomon had been born six years before The Wiping of Mankind. It had a name, the event; Mankind with a capital ‘M’. A biological terror attack gone wrong; an airborne virus designed to kill all individuals with specific genetic heritage - nicknamed the Nazi Flu. It mutated, attacked the ‘X’ chromosome. Boys and men.

Two thousand, seven hundred and eighty-four submarine personnel survived the initial bouts, but in the following years their number had dwindled to just eight-hundred. The virus grew weaker after a year but it affected their fertility and no children of any sex were produced.

Of course, there were the frozen-sperm banks. Governments took over the few that remained after the looters. Sperm was sold to the highest bidders, boys had been conceived, but none survived to be born – the virus was dormant in the mothers, until an ‘X’ chromosome appeared.

The virus had run its course. The eight-hundred men were now rumoured extinct after over-zealous feminist groups decreed them pointless, in light of their infertility.

Solomon, now twenty, survived first by luck, then by the pure tenacity of his marine-biologist mother. During the initial Wiping, she and six-year-old Solomon had been collecting algae samples from Jacques Cousteau’s underwater living pods, fifty-foot down in the Florida Keys. His mother heard the news on her portable radio, made a flash decision to utilise Cousteau’s pods and for the last fourteen years, had been the only one of the two to surface.

They adapted the pods but their living was meagre survival, and for what?

Rumour on land was that a man survived, hidden, guarded by his serpent mother - a fertile man. Desperately, women tried to locate him; he became revered, a god; spoken of as myth. He was their hope, their key to survival as a species, but Solomon had been brought up as the son of a scientist. He understood that one man alone could not ensure the continuation of mankind. Could his sons and daughters - siblings, procreate successfully? Genetically, it could be disastrous.

Though sometimes, the idea of being a god got into his head and this young man, who hadn’t seen the light of day for fourteen years, wondered what it might be like.

(Photo by Louis Hansel on Unsplash)

I wished to be able to step backward and forward in time. My wish was granted, literally. I believe I can still hear him laughing inside his bottle.

Each step back takes me ten years prior; I can take no more than four before I step myself out of existence.

I take two tentative steps forward then, realising I do not know the extent of my life-span, I stand stock-still; three steps from the fridge, four from the phone and eight from the bathroom.

Was side-stepping an option? I forgot to ask.